His adaptation is a vehicle for ridicule and invective, targeting race, religion, greed, identity and purpose. With his extraordinary ear for dialogue, O’Brien creates his own fantastical world, and the outcome is a hilarious satire of Irish stereotypes – as Orangemen, Dubliners, Corkagians and culchies become warring ants, bees, crickets, dung-beetles, and other small-minded invertebrae.

The lost text of this play, Hilton Edwards’ prompt copy from the 1943 Gate Theatre performance, was discovered in the archives at Northwestern University, Illinois.

‘A play by Ireland’s most celebrated comic writer, Flann O’Brien, lost for fifty years, has been discovered in the archives of Northwestern University, Illinois, by an American academic.

The O’Brien play, Rhapsody in Stephen’s Green, was put on in Dublin by the Edwards-MacLiammoir company at the Gaiety Theatre during Lent in 1943 with a cast of 150 – representing millions, as is obligatory with an insect play. But, presumably because of the offence it gave to Catholics, Ulster Protestants, Irish civil servants, Corkmen, and the aspersions it seemed to cast on married life and the superpatriotic Fianna Fail party, it only ran six days and was never again performed …

However it and the context in which it was born – and rapidly snuffed out – gives intriguing insights into neutral Ireland of the 1940s, suffocating in puritanism and insular politics.’ -Peter Lennon, The Guardian

Using a play by Karl and Josef Capek as source, Flann O’Brien locates his insect drama in Dublin, his most familiar stalking- territory. 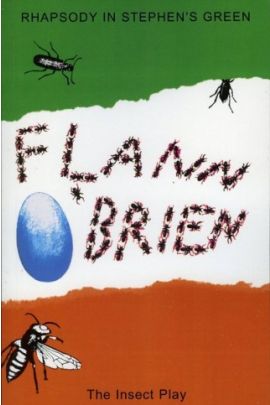