Over 20 years Millar reported the evolution of the process and the slow triumph of constitutional politics, and of Anglo-Irish diplomacy, over a counsel of despair about a Province long perceived as a problem without solution. In face of much hostility and widespread indifference during the years of political impasse, many journalists and broadcasters helped foster necessary understanding of the Northern Ireland conflict and those trapped in it. But few had the space, opportunity, commitment and insight Millar brought to the task - his grasp of the detail, ear for the unspoken opening and enthusiastic embrace of the participants on all sides making him a must read in London, Dublin and Belfast.

Insiders attest to the role played by Millar and The Irish Times, not least for insisting on speaking to politicians at times when they refused to speak to each other. As Millar's reportage and analysis helped make his newspaper the house journal of the talks process, the British and Irish governments and individual politicians availed themselves of the opportunities it provided. At one difficult moment when London and Dublin tried to second-guess David Trimble's position, Tony Blair expressed relief to Bertie Ahern that at least the unionist leader was still talking to The Irish Times.

Blair also gave the paper his most comprehensive print interviews about Northern Ireland policy - the second, in 2003, at the famous 'fork in the road' moment for Sinn Fein and the IRA. As early as 1988-89 Millar was talking to John Hume and Cahal Daly about dual referendums, the legitimacy of the Northern Ireland state, and the vexed question of policing.

True to form, our chronicler likewise remained ahead of the game at St Andrews in October 2006, the first journalist to divine that Sinn Fein's endorsement of the PSNI would see the Rev. Ian Paisley make peace with republicans and form a power-sharing government with a co-equal Deputy First Minister Martin McGuinness.

Northern Ireland: A Triumph of Politics : Interviews and Analysis 1988-2008 (Hardback)

From stalemate to consensus by way of the Belfast and St Andrews Agreements, this is a 'big picture' treatment of the peace process. In a compelling compilation of landmark interviews and keynote analysis, award-winning journalist Frank Millar charts a unique chapter in Northern Ireland's history - in the words of the history makers themselves. 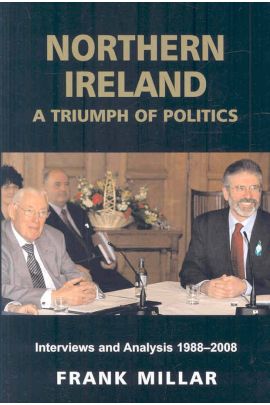