This is the story of Eugene Macnamara, a maverick young priest from Ennis County Clare who, in the 1840s, sought to establish a colony for Irish families in the San Joaquin Valley of Alta California, Mexico's far north-western territory. Had he succeeded, a region presumably named New Ennis, New Clare or New Ireland would have been born.

Sadly his scheme failed due to the taking of California by the US Government in 1846, but Macnamara's life encompassed a wealth of experience and intrigue, leaving evidence of his endeavours dispersed across the globe - Hawaii, Rome, Paris, Mexico, Chile, London. From expulsion from his Paris seminary to sailing from North America - having helped provoke the US-Mexican War - Macnamara caused controversy and strife wherever he went.

Arriving in Mexico in 1844 with an ambitious proposal to settle a colony of Irish and British families in Alta California at a time of fenceless and unfriendly relations between North America's landlords - Mexico, the US and Britain - he remarkably secured a license from the Mexican Government to settle over 20,000 square miles of territory for 15,000 settlers.

However, his arrival soon sparked the interest of US President Polk who sought to pre-empt any British colonies from getting a grasp of American soil. The US-Mexican war ensued and Macnamara came to personify, in American minds, a political and commercial conspiracy between Britain and Mexico against the US. Macnamara's legacy can be traced all over the globe and this biography provides the compelling story of a fascinating Irish individual.

2014 Hardback 1st limited edition. Sensational story of a young priest from Co Clare who found himself at the centre of monumental events taking place on the west coast of North America at the time of the Great Famine in Ireland. 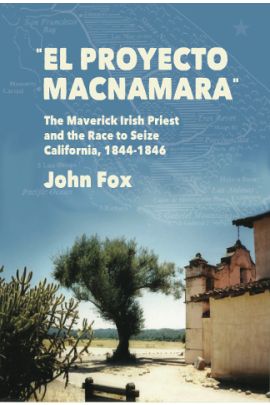