Easy-to-Read Bible Stories was inspired by Erics niece whom requested to hear Bible stories that would make more sense to her.

The number one excuse that most adults use for not reading their Bible is this: It just doesnt make any sense to me. This book covers every story in Genesis, the first book in the Holy Bible. But rather than trying to rewrite a new version, Eric simplified the same story and added a life-like conversational style to it, with a touch of sarcasm, which really makes it come to life.

Eric believes that every character in every story just wants to be heard like the rest of us. The stories are written to make the characters seem more realistic; as if their life were being narrated. When you are reading each story, the reader should be able to easily relate to the character. When reading about Adam and Eve, its not enough to know the basics but why did they eat the apple when they knew they shouldnt.

How did Satan play a part in the fall of mankind? Witness, first-hand, Abraham questioning God to his face! Would a loving God really destroy the earth? And if so, would he do it again? Did anyone survive the destruction of Sodom and Gomorrah? People question authority every day; its in our nature. We want to be our own god. After all, we know whats best for us. But were we created that way or did we inherit it from our ancestors?

Every character speaks to each other (and sometimes to God) as if they were alive today. Find out why, Easy-to-Read Bible Stories, is truly adult written, kid approved! Eric originally self-published in 2015 and started a Facebook page for fans. Since then, people around the world, of all ages, have enjoyed being a part of the characters lives from the first book in the Bible.

Easy-to-Read Bible Stories was inspired by Erics niece whom requested to hear Bible stories that would make more sense to her. 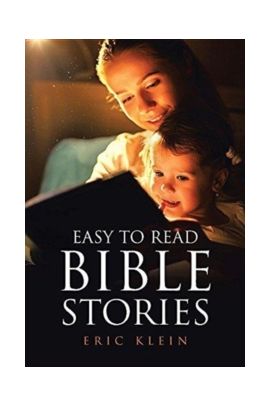