This charming collection of stories and poems, selected from A.A.Milne's Winnie-the-Pooh, The House at Pooh Corner, When We Were Very Young & Now We Are Six, tells extraordinary tales of a Boy and his Bear, accompanied by E.H.Shepard's beautiful illustrations.

Set for release in August 2018 (US), Christopher Robin is a live-action film that follows a grown up Christopher (Ewan McGregor) as he reunites with his childhood playmates Winnie-the-Pooh, Piglet, Tigger, Eeyore, Rabbit and many more - returning to The Hundred Acre Wood for the first time since he was a boy.

This collection is the perfect companion for fans of the film, teaching lessons of friendship and reflecting the power of child's imagination.

Winnie-the-Pooh: The Christopher Robin Collection (Tales of a Boy and his Bear)

Christopher Robin lives behind a green door in the Hundred Acre Wood. He likes catching Woozles, leading expeditions and throwing parties with Piglet, Rabbit, Eeyore and, of course, his very best friend, Winnie-the-Pooh. 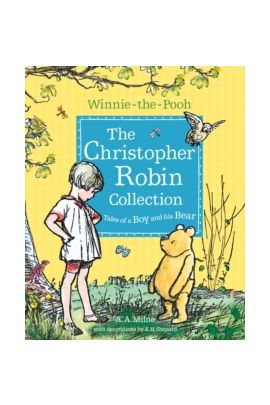