John A. Costello remains the most elusive of our former Taoisigh, despite his enormous contribution to Irish history. He declared the Republic, led the country’s first ever coalition government, and faced the Mother and Child Crisis. A surprise choice who battled against taking the job, Costello was the Reluctant Taoiseach.

Historian and political correspondent David McCullagh charts the life of this fascinating man, using his personal archive of papers, as well as interviews with former colleagues, family and friends. McCullagh offers new insights into a political career which stretched from Independence to the end of the 1960s, including the Commonwealth Conferences of the 1920s, to the new Constitution of 1937, and Governments in the 1940s and 1950s.

'This is the best historical biography in recent years' Maurice Manning, Irish Mail on Sunday

'In David McCullagh, John Costello has found the best biographer he could possibly have hoped for' Andrew Lynch, Sunday Business Post Agenda

'A biography that is not just hugely authoritative but also highly readable' Shane Coleman, The Sunday Tribune

The Reluctant Taoiseach - A Biography of John A Costello

Politician, barrister, Attorney General, politician, family man—The Reluctant Taoiseach takes a fresh and revealing look at the life of a man at the centre of politics and law during one of the most turbulent periods in Irish history. 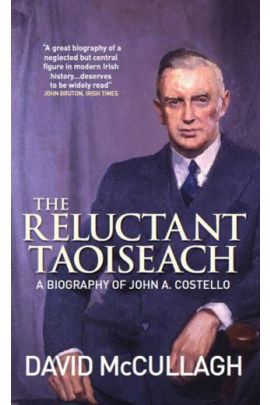