The authors, Tom Miller and co-author/researcher Tony Fagan, are retired Gardaí. Tom Miller, an honours history graduate of Maynooth University was a Garda Sergeant in County Wexford and survived events including being shot at in a bank raid and being taken hostage and imprisoned by the Provisional IRA.

Tony Fagan, who previous to joining the Gardaí, was a Defence Forces member of the Irish Air Corps, served as a Detective Garda in County Wexford. Included in the book
is Tony Fagan’s unique list of Gardaí by station, rank and reg number who served in more than 35 Garda Stations in County Wexford in the past 100 years. The Guards tells of the deployment of Gardaí from Dublin in October 1922 to the towns and rural areas of County Wexford. It gives account of major events down through the past 100 years nationally and in the county that the Gardaí dealt with.

This includes accounts of many of the events and emergencies that shocked the people of County Wexford and the country in the past 100 years. Among them are cases of murder, manslaughter, bank robberies and clerical child sexual abuse. The activities of the Provisional IRA also get prominence.

Features include the murder of Garda Seamus Quaid, a bank raid and shoot-out by the Provisional IRA on AIB Bank in Enniscorthy, a train crash at Clough, Gorey, the bombing of Campile by the German Air Force and more bombings in the Blackstairs, a murder in New Ross, imprisoning and assaulting of Gardaí, the Tuskar air tragedy, missing persons and the discovery of the body of murder victim Elizabeth Plunkett.

There are uplifting and inspirational features in the book on the visit of US President John Fitzgerald Kennedy, Garda involvement in the local community and in achievements in sports at local, national and at international level in Europe, Australia and the USA.

A number of stand-alone features tell of the experiences of individual Gardaí. Photographs include groups of the last of the RIC, the Old IRA Kyle Flying Column, the de-railing of trains and burning of big houses in the Civil War, a visit of then Taoiseach, Éamon de Valera, the visit of American President, John Fitzgerald Kennedy, groups of Gardaí and various photographs of The Troubles.

The Guards, subtitled Policing County Wexford 1922 – 2022, is a history of the founding and development of An Garda Siochána or the Guardians of the Peace who served Ireland, and in particular County Wexford, for the past 100 years. 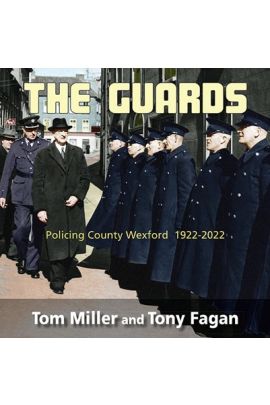