Mark Twain's story of a boy's journey down the Mississippi on a raft conveyed the voice and experience of the American frontier as no other work had done before.

When Huck escapes from his drunken, abusive 'Pap' and the 'sivilizing' Widow Douglas with runaway slave Jim, he embarks on a series of adventures that draw him to feuding families and the trickery of the unscrupulous 'Duke' and 'Dauphin'. Beneath the exploits, however, are more serious undercurrents - of slavery, adult control and, above all, of Huck's struggle between his instinctive goodness and the corrupt values of society which threaten his deep and enduring friendship with Jim.

Based on the first edition of 1884, The Adventures of Huckleberry Finn includes a chronology and list of further reading by Richard Maxwell.

Samuel Langhorne Clemens (1835-1910) trained as a steamboat pilot on the Mississippi river; 'Mark Twain', a phrase used on riverboats to indicate that the water is two fathoms deep, became the pseudonym by which he was best known. After the Civil War, Twain turned to journalism, publishing his first short story in 1865. Dubbed 'the father of American literature' by William Faulkner, Twain led a colourful life of travelling, bankruptcy and great literary success. If you enjoyed The Adventures of Huckleberry Finn, you may like Mark Twain's The Adventures of Tom Sawyer, also available in Penguin Classics.

'All modern American literature comes from one book by Mark Twain called Huckleberry Finn ... There has been nothing as good since' Ernest Hemingway

'Huckleberry Finn, like other great works of imagination, can give to every reader whatever he is capable of taking from it' T.S. Eliot

Mark Twain's witty, satirical tale of childhood rebellion against hypocritical adult authority, the Penguin Classics edition of The Adventures of Huckleberry Finn is edited with a critical introduction by Peter Coveney. 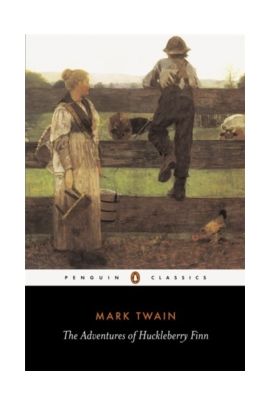