Hubert Butler's understanding of Ireland as part of the bigger picture of prehistoric Europe is refreshing and his ability to trace the traditions of the historical Irish back to that picture is exciting. When it was first published in 1972, Hubert Butler's pioneering masterwork was received with scepticism by his contemporaries. He used linguistics to trace the origins of myths and saints back to pre-Celtic Ireland and Europe, and showed how these stories and names - ancestors of half-forgotten tribes - became absorbed by Christian mythology.

The early Irish wove their stories, as did the Greeks, the Hebrews and all early peoples, from the migration of tribes and by wordplay with their time-battered, unstable names. Ten Thousand Saints raises fascinating problems that take us beyond the frontiers of recorded history to the remote movements of European peoples, to the clash of tribes and tongues. As modern DNA sampling and genome-mapping, seen in the regional patterning of today's Irish surnames, reinforce Butler's findings, his methods and thesis are now gaining scholarly recognition.

This new edition, amplified and updated, demonstrates ingeniously coded histories - via place names, legends, hero-figures, saints and ancestors - that relate to the wanderings and minglings of all the great tribes of Europe', extending back to Neolithic times.

Ten Thousand Saints: A Study in Irish and European Origins

During the twenty years from the early 1950s to the [1972] publication of Ten Thousand Saints, Hubert Butler amassed, by hand, every possible reference to every possible saint in the Irish corpus in Irish and Latin. ’A work in which sound learning is combined with distinctive literary grace’ - The Church of Ireland Gazette 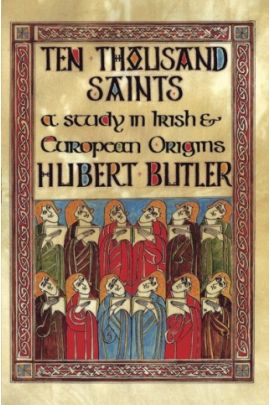