Caroline Flack's frank and hugely entertaining memoir. In December 2014, Caroline danced her way into the nation's hearts when she raised the BBC's coveted Strictly Come DancingGlitterball. Known for her throaty laugh, edgy humour and quick-fire wit, showcased on some of Britain's most popular reality TV shows, she was thrust into the mainstream, hosting ITV's flagship talent show, The X Factor, with Olly Murs.

In Storm in a C Cup, Caroline reveals the laughter and pain behind the TV persona, from a sheltered Norfolk childhood shared with her twin sister, through her madcap student days, to the challenging career ladder leading to eventual TV success, not forgetting its dark shadow, when intrusive media attention turned the dream into a nightmare.

She takes us behind the cameras at some of TV's most successful reality shows, including the tensions, stresses and unlikely friendships of the three-month adventure that was Strictly. Caroline wears her heart on her sleeve, documenting her joys and heartbreaks with the humour, resilience and unflinching emotional honesty that made her of one of television's most popular celebrities.

Storm in a C Cup : My Autobiography

Caroline Flack's frank and hugely entertaining memoir. In December 2014, Caroline danced her way into the nation's hearts when she raised the BBC's coveted Strictly Come DancingGlitterball. 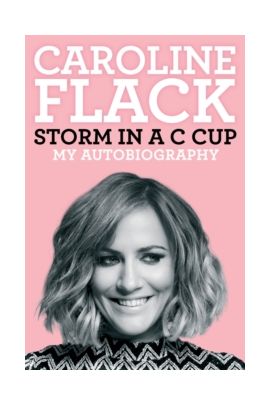