'As I shall embark in a business, within a few days, the event of which is uncertain, I take the opportunity of a vacant hour to throw on paper a few memorandums relative to myself and my family ...' So begins Theobald Wolfe Tone's riveting autobiography, commenced in 1796 before he sailed with the French to Bantry Bay.

Since its initial publication in 1826, the Life of Theobald Wolfe Tone, comprising the autobiography as well as a monumental collection of his journals, letters and political writings, has been regarded by historians as an indispensable source for the history of the 1790s, and for the life of Tone himself.

Its blend of candid memoir, frank diary entries and political passion has contributed to the mystique of this Protestant revolutionary and founding father of Irish republicanism, who strove to promote 'the common name of Irishman' in place of the political and religious barriers that had divided his country. While there have been a number of abridged versions of the 1826 Life as compiled and edited by Tone's son William, this is the first new unabridged edition of the work.

Using Tone's original manuscripts, editor Thomas Bartlett has restored passages suppressed - for reasons of primness and prudence - by the Tone family. Tone emerges in these pages as a man of great energy, wit and commitment. The development of his political ideas, the intimate details of his danger-filled life, the power of his prose - all are on display throughout this extraordinary compendium.

Tone's Life, documenting the drama of his brief career, forms his most enduring legacy.

’A magnificent contribution to a more direct understanding of a key figure in the Republican tradition. Tone’s diaries are not only of historical and political interest. They are also a dazzling literary display.’ - Martin Mansergh, Irish Independent 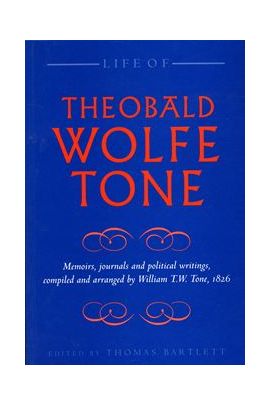