A startling collection of plays by playwrights working in the north and south of Ireland, all of which have been groundbreaking events in contemporary Irish theatre

At The Black Pig's Dyke by Vincent Woods depicts a group of mummers in the borderland between North and South, blending their rituals of death with the all-too-modern assassins going about their awful task;

in Hard To Believe by Conall Morrison an army intelligence agent for the British invokes his Protestant preacher grandfather and his turncoat father who married a Catholic and thereafter denied his background;

in Disco Pigs by Enda Walsh two friends bonded in their fantasies and shared baby-talk face into Cork city on their seventeenth birthday;

Frank Pig Says Hello by Patrick McCabe (Winner of the 1997 George Devine Award) is about the sullen meanness of a village community towards an innocently simple young man;

in Language Roulette by Daragh Carville a group of young people in Belfast come together for a reunion and the underlying atmosphere is anger and revenge;

Bat The Father, Rabbit The Son by Donal O'Kelly is a powerful personal story about the reversal of a father-son relationship where the son is envious of the father's unambitious expressiveness. 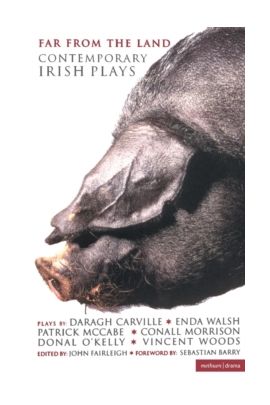