Mark Twain had it all wrong. Golf is not a good walk spoiled, golf is a journey. And when Ireland provides the map it becomes an 11,000km odyssey for one man in a camper van. Ireland's beauty shines through, but the people encountered along the way, the golf clubs visited and the idiosyncrasies of a 20-year old camper van formed the fairways on which this story plays out.

The weather is a constant distraction, helped greatly by a leaking roof, but the journey was dictated by the location of the 350 courses. Kevin's travels took him to Cork and Kerry, to Clare, Galway and the North West. Northern Ireland was quiet and welcoming until the police were called. He circled the Midlands more than once, and ventured into the beauty of Donegal, avoiding the potholes and boy racers.

He met Americans, Germans, British and Born Again Christians. Most were wonderful, a few were barking mad and then there was the crazy lady in the middle of the road. As for the golf, he met great golfers, bad golfers, rude golfers, and golfers as old as time itself. There were passionate golfers gambling more money than most make in a month, and golfers whose only passion was to reach the bar.

Everyone had a story, a memory to share, a joke to tell.

This is an affectionate travelogue about Ireland and Irish golf written with passion, infectious humour and light-heartedness. 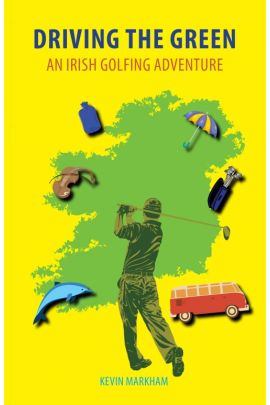