Derry was a prosperous town in 1905, according to the Board of Trade. Since 1851, its population had almost doubled, and it had acquired a university college, an opera house, a new city hall, a fire-brigade, a public park, and a tramway.

The transport infrastructure was good, with four railway systems and regular cross-channel steamships. Cluttering its streets were grain and flour mills, bacon cellars, distilleries, a shipyard, iron foundries, coach works, and 27 shirt-factories which made Derry the UK s leading center of shirt-making. Who and what were the people who labored to produce this image of prosperity?

Where did they come from, how did they live, what did they eat, how much did they earn, and how did they try to improve their conditions? Between 1889 and 1923, Irish Labor was revolutionized by three waves of agitation. This book looks at the first of these, the new unionism of 1889-91, its impact on Derry, and its aftermath to 1906.

It was a time of trade union organization, strikes, May Day parades, a procession of visiting socialist orators, and Labor politics. It was also a time when the usual employers response to wage demands was dismissal and strike-breaking. (Series: Maynooth Studies in Local History - No. 113).

Derry Labour in the Age of Agitation, 1889-1923 Part 1 (Maynooth Studies in Local History) 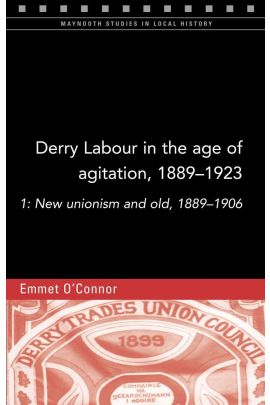