Over the past 26 years, the publication of Sportsfile’s A Season of Sundays has become an annual sporting tradition, marking the end of each GAA season with a stunning collection of images. This year’s eagerly anticipated offering looks back at all the highlights of another year to remember.

The high points of another busy calendar year in the life of the GAA are expertly captured by the lenses of the Sportsfile photographers – and enhanced by Alan Milton’s perceptive captions – and the year that was 2022 was not short on drama.

From unforgettable AIB All-Ireland Club finals in Croke Park when Ballygunner and Kilcoo scaled their respective ‘Everests’ for the first time, both with late, late shows, to a new season format which saw the games come thick and fast in both football and hurling, 2022 intrigued GAA followers everywhere. The Munster hurling championship gave us a final for the ages before Limerick’s all conquering crusade marched on and in football Derry emerged from the most competitive of the provincial championships to end their barren spell and return to Croke Park as Ulster kingpins.

When Kerry accounted for Dublin in dramatic fashion in the semi-final, the path was cleared for them to lock horns with Galway in a final paring to whet the appetite of the traditionalists – a game that would see the Sam Maguire Cup return to the Kingdom for the first time since 2014.

There was no change in the winners’ enclosure in hurling as Limerick recorded a first ever three in a row win but not before Kilkenny provided their sternest test. The Cats’ legendary manager Brian Cody bowed out ending what was the longest inter-county management tenure in Gaelic games.

The Meath ladies footballers rose to the top of the pile once again adding to their breakthrough win of the previous year with a final victory over Kerry and on the camogie front, Kilkenny edged Cork to claim the spoils.

A Season of Sundays: Images of the 2022 Gaelic Games Year (Hardback)

The 2022 edition captures the highs and lows of another incredible GAA season with another insightful look back on a season that saw capacity crowds return to GAA stadia. 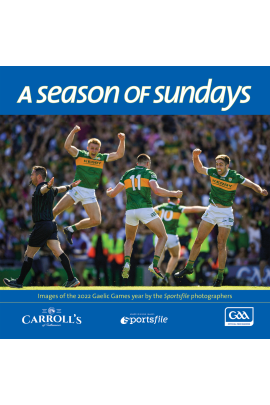