Description
From the first book printed in Ireland in the sixteenth century, to the globalised digital media culture of today, Christopher Morash traces the history of forms of communication in Ireland over the past four centuries: the vigorous newspaper and pamphlet culture of the eighteenth century, the spread of popular literacy in the nineteenth century, and the impact of the telegraph, telephone, phonograph, cinema, and radio, which arrived in Ireland just as the Irish Free State came into being. Morash picks out specific events for detailed analysis, such as the first radio broadcast, during the 1916 Rising, or the Live Aid concert in 1985. Outlining new ways to think about Irish culture, this important book breaks new ground within Irish studies. Its accessible narrative explains how Ireland developed into the modern, globally interconnected, economy of today. This is an essential and hugely informative read for anyone interested in Irish cultural history.
More Information
Review(s)
Write Your Own Review

A History of the Media in Ireland

Christopher Morash
€69.99
Add to Wish List
The first complete overview of four centuries of communications in Ireland from the first printed book to the internet.
In stock
Skip to the end of the images gallery 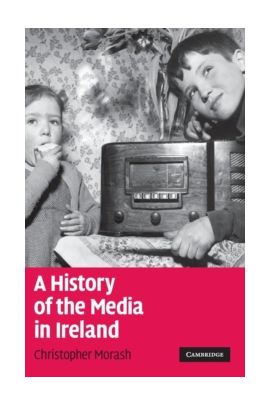